“A Tediously Accurate Map of the Solar System”, by Josh Worth. Great fun. (Via Laughing Squid.)

The jaw dropping true story of the Trekkie who convinced Nichelle Nichols not to... by George Takei
Thursday December 5th, 2013 at 3:55 PM

1 Comment
The jaw dropping true story of the Trekkie who convinced Nichelle Nichols not to quit the show. Simply amazing.

True Story: One Of TV's Most Inspiring Women Almost Gave Up. Guess Who Persuaded Her Not To?
www.upworthy.com
He might be the most important Trekkie ever.
Read the whole story

jzsimon
reply
Who knew he was a Trekkie?

One Nation in Support of Biomedical Research? by Dr. Sally Rockey and Dr. Francis Collins
Thursday October 17th, 2013 at 1:04 PM

“It was the best of times, it was the worst of times.” Until recently, we’d never have dreamed of mentioning the famous opening line of Charles Dickens’ Tale of Two Cities in the context of U.S. biomedical research. But now those words ring all too true.

The “best of times” reflects the amazing technological advances and unprecedented scientific opportunities that exist right now. We’ve never had a better chance to make rapid progress in preventing, diagnosing, and curing human disease. But the “worst of times” is the other reality: NIH’s ability to support vital research at more than 2,500 universities and organizations across the nation is reeling from a decline in funding that threatens our health, our economy, and our standing as the world leader in biomedical innovation.

After 10 years of essentially flat budgets eroded by the effects of inflation, and now precipitously worsened by the impact of sequestration (an automatic, across-the-board 5.5% cut in NIH support), NIH’s purchasing power has been cut by almost 25% compared to a decade ago.

Ironically, the United States is slashing its R&D spending at a time when other nations are significantly boosting theirs—as you can see in the bar graph featured in this post. It appears that global competitors have read our playbook, noted how U.S. biomedical innovation has helped to fuel our economic growth over the past 60 years and are now ramping up their efforts to emulate our success. Or, if we may quote Dickens again, “It was the age of wisdom, it was the age of foolishness.”

Unfortunately, the drama that NIH-supported science faces today is not a Dickens novel. It’s very real. The progressively worsening budget situation has the potential to inflict profound, long-term damage to U.S. scientific momentum and morale.

Imagine yourself as a visionary young scientist at one of our nation’s research universities. You have many exciting ideas. You write up the most promising and send the grant application to NIH in hopes of being supported. But you find it increasingly difficult to remain optimistic or to see a future in this field when you look at the steep odds of being funded. Currently, a grant application has a less than one chance in six of being successful—a troubling trend that’s detailed in the line graph below.

Because of sequester, NIH will be funding 650 fewer research grants than it did last fiscal year. Nearly a quarter of those unfunded applications have come from scientists who’d already made substantial progress in earlier grant awards and were hoping to renew them. Peer reviewers judged their research in the top 17% of all applications received, but they will now have to stop ongoing research projects—meaning, in this double tragedy, we will lose both previous and future research investments.

If sequestration continues for a full 10 years, the outlook for the U.S. biomedical research enterprise turns downright grim. NIH will lose a staggering $19 billion, and, with it, our nation will lose an untold amount of precious time in its race against Alzheimer’s disease, cancer, arthritis, asthma, autism, depression, diabetes, heart disease, HIV/AIDS, influenza, and so many other causes of pain and suffering.

While the full impact of sequestration on biomedical research won’t be felt until next year or the following, reports are already starting to come in from the front lines. A new nationwide survey by the American Society for Clinical Oncology found that three out of four cancer researchers said the current federal funding situation is negatively affecting their ability to conduct research. The survey reports 28% of the cancer researchers have decided to participate in fewer federally-funded clinical trials; 27% have postponed the launch of a clinical trial; and 23% have had to limit patient enrollment on a clinical trial. These are very sobering statistics—especially for cancer patients and their loved ones.

Perhaps the most serious and long-lasting impact of sequestration on U.S. science is the one that is most difficult to measure. We fear this budget uncertainty is going to hit young researchers the hardest because a lack of funding leads to career uncertainty and could drive many of them out of the country or even out of science completely. This is our nation’s priceless pool of innovative talent—the source of the high-risk, high-reward research that may lead us to the next Nobel Prize or next big breakthrough in medical care. If our current budget battles cost the United States an entire generation of scientists, we will have compromised our nation’s global standing in biomedical research and slowed the improvement of health for all Americans.

This is a defining moment for the United States. As a nation, history will judge us by how we set priorities. Should not NIH-funded research aimed at alleviating suffering and advancing human health rank very high on that priority list? We hope that when everything is said and done, all of us can emerge telling the Tale of One Nation—a nation united in support of the value of biomedical research.

jzsimon
reply
America is slowly but surely becoming a third world country, and by its own hands. :(

Bits Blog: How to Opt Out of Google’s Plan to Use Your Name and Comments in Ads by By CLAIRE CAIN MILLER
Tuesday October 15th, 2013 at 5:48 AM

1 Comment
Google said it made it easy for users to opt out of its new plan for using their personal information in social ads, but some readers found the opt-out process to be confusing.

Amar G. Bose, chairman of Bose, with a Wave radio in 1993.
Read the whole story

The iOS apps are finding themselves host to a whole slew of additions and enhancements. Today I get to tell you about the iOS app’s newest feature: the Text view.

You can already use the Text view on the web. It’s great for extracting the story’s content on demand and helps you stay on a single tab to do all of your reading.

If you have an iPad or iPhone, you can now use the Text view by hitting the Text/Story button on the bottom left of the story detail pane. 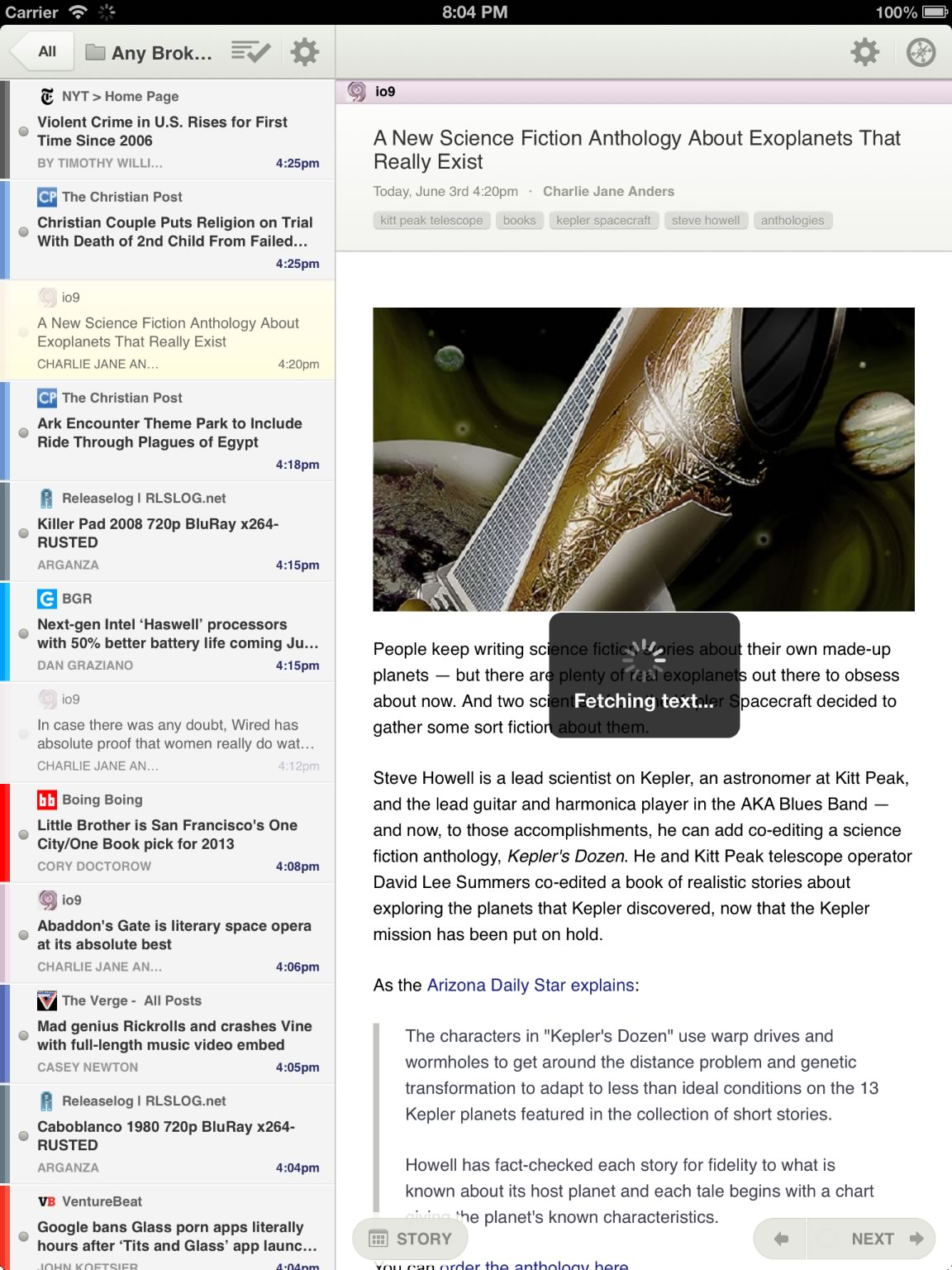 On Android? Don’t you worry, major updates are finishing up as we speak, and soon the Android app will reach full feature parity with the iOS app. It’s just a matter of time.

jzsimon
reply
I love this feature!

Germany, Düsseldorf
Next Page of Stories